The new owners of J&B Greenhouses began looking at ways to improve efficiencies related to running a year-round greenhouse in Southern Ontario, Canada as heating a poly greenhouse is a major variable expense.

EndoTherm was installed into the system in early March 2018 at the same time as a corrosion inhibitor.

Due to the recent purchase of the property and change in site use historical data was only available from January 2017 to February 2018. This was used to create a baseline regression graph which the post-EndoTherm consumption can be compared. 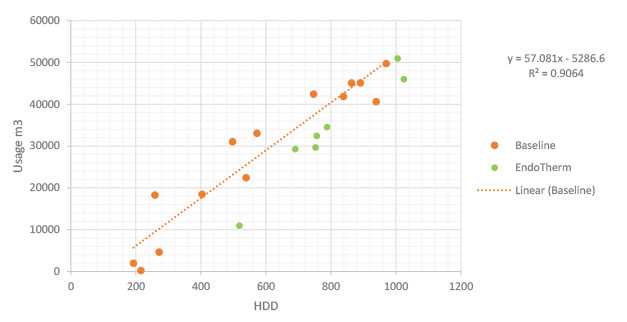 The predicted consumption for the known HDD value for the billing month (from nearby weather station in Burlington Piers, Ontario) is taken from the above baseline trendline (y = 57.081x – 5286.6). What follows is a comparison with the actual consumption to identify a change in the consumption patterns. The greenhouse does have some variability but a pilot over 12 months will show an overall trend improvement.

The usage in March – February 2019 had reduced by 16.31% compared to the baseline immediately before installation.