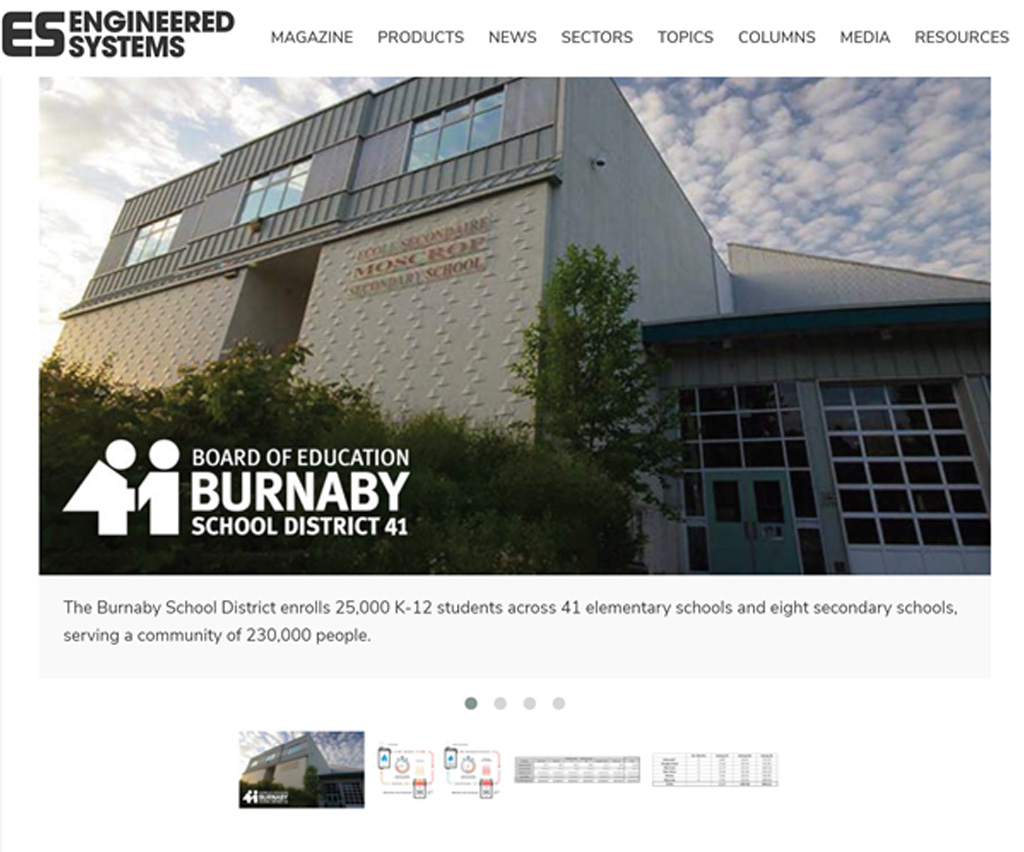 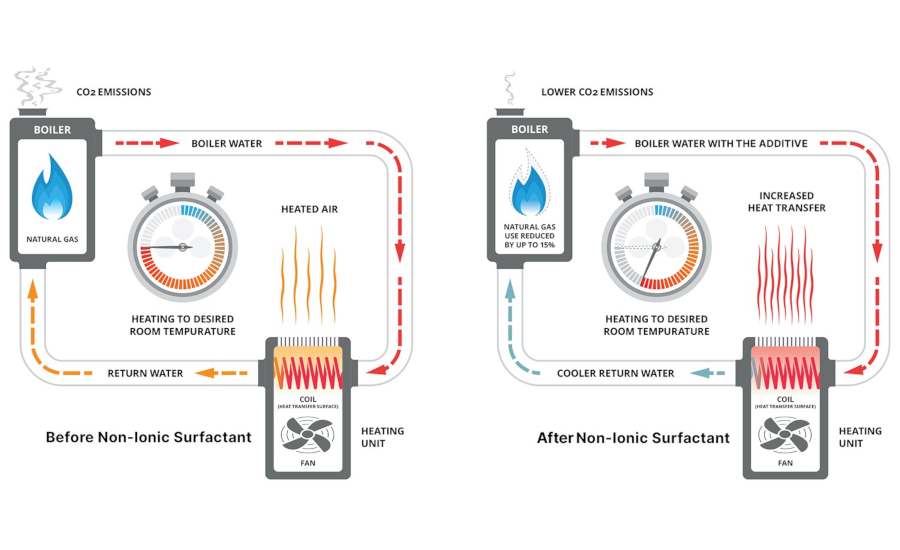 Figure 1: The Delta T of the system is improved leading to greater efficiency.

The success EndoTherm has delivered to Burnaby School District has been featured in Engineered Magazine. The article can be read by visiting the magazine online and is reproduced for convenience below:

Burnaby School Districts’ properties have a wide range of ages and hydronic systems.

Society has been shifting toward greener solutions for years, tackling the largest causes of greenhouse gas emissions first and then working toward more directed solutions as the data is collected. One of the single largest greenhouse gas emitters was revealed to be buildings and facilities, constituting nearly 38% of global emissions.

Burnaby is an incorporated municipality located immediately east of metro Vancouver, British Columbia, Canada, and is the third largest city in the province. Widely considered one of the greenest cities in North America, Vancouver’s metropolitan area draws the majority of its energy from hydroelectric and renewable resources over a wide range of technology.

The second greenest city in North America, Vancouver has a history of embracing new green technology and has set the ambitious goal of being the greenest city on the planet by 2050. One of the major factors hindering that goal is the burning of fossil fuels to heat buildings. The use of natural gas for commercial heating is the single largest source of carbon pollution in Vancouver, making up 54% of all greenhouse gas emissions, exceeding that of vehicles at 39%.

In line with the environmental mindset of the region, the Burnaby School District #41 turned to innovative energy-saving technology to lighten the burden on aging systems, lower emissions, and reduce natural gas consumption.

“It was brought to our attention that there was a pilot funded by FortisBC [BC’s largest provider of natural gas],” said Alexis Takahashi, energy specialist for District #41. “We saw it as a good opportunity to try something new. HVAC surfactant additives had demonstrated success in Europe, and we had hopes that it would be a new tool in our ongoing boiler maintenance.”

The Burnaby School District enrolls 25,000 K-12 students across 41 elementary schools and eight secondary schools, serving a community of 230,000 people. The district had to consider several factors when seeking to improve HVAC operations. The age of the facilities and the boiler systems ranges widely across the portfolio, so quantifying and comparing data can be a challenge. Another issue is the cost of adoption of green technology. Replacing boilers and retrofitting systems requires a high initial investment and scheduled downtime.

Partially funded by the FortisBC: Innovation Demonstration Program to validate the claims of energy conservation measures (ECMs), the district decided to test an innovative energy-saving HVAC surfactant additive. When installed in system water, previous projects had shown that non-ionic surfactants improved system efficiency by up to 15%. By implementing the technology in several properties, the cumulative impact would lower the emissions and energy costs across the entire portfolio, having a greater impact than replacing an individual boiler at a single property for the same investment.

The concentration of non-ionic surfactant in system water should remain between 0.7% and 2% of the total system volume. Annual testing and monitoring of system data is recommended to verify the ideal concentration and maintain peak energy efficiency. Non-ionic surfactants perform side by side with glycol and corrosion inhibitors and are less corrosive than water. Installation is an easy, one-person task and requires no downtime or additional equipment.

The district selected six locations with suitable hydronic boiler systems. None of the locations had upgrades in the past 24 months, and no changes were planned over the next six months. To secure confident conclusions from the dataset, study leads ensured the six schools followed the same International Performance Measurement and Verification Protocol (IPMVP).

In anticipation of installation in August 2018, monthly data was collected by the Burnaby School District for all schools dating back to September 2016. Moreover, historic data for usage and cost was collected to determine overall savings and the simple payback (see Figure 2).

Figure 2 – The average annual numbers for the six properties chosen by administrators.

The installation of the HVAC surfactant additive involved simply pouring the designated volume into the system water. The amount was based on the recommended starting levels of 1% of the total volume of the system. Data was then collected for the five- to six-month pilot period, which included the coldest months of the year.

All schools remained fairly consistent during the pilot except for Edmonds Community School. Its systems struggled to keep up with the heat load, so the district’s HVAC team adjusted boiler run times during the trial period which caused an increase in demand.

After weather normalizing consumption following the IPMVP guideline, the district experienced energy savings across all six sites, ranging from 3.84% to 19.56% with a mean average of 11.17% (see Figure 3). As with all measurement and verification (M&V) projects for heating/HVAC, many factors may impact site consumption. By selecting buildings where performance changes could be isolated, these factors were minimized.

Only Edmonds experienced operational changes that impacted energy performance. As a result, Edmonds displayed a significantly lower efficiency improvement and pulled down the mean average. Using data collected for the first three months at Edmonds, prior to the run-time increase, shows an efficiency improvement of 15.64%, which would bring up the weighted average to over 13%.

The cumulative gas saving during the pilot period was 1003.88GJ, which is a cost reduction of $8,964.62 based on a provided delivered gas price of $8.93/GJ. The 1003.88 GJ decrease in natural gas during the pilot saved 50,500kg of CO2e from entering the atmosphere.[1] This is the same annual emissions as 10.7 passenger cars or the carbon sequestered by 59.4 acres of forest in one year.

The district reports the energy savings resulted in a simple payback of 24 months. Stakeholders involved in the project say the HVAC additive performed as predicted and has shown that to be a sustainable solution for use across the portfolio to lower emissions, decrease system cycles, and reduce energy costs.

“We were pleased with how the pilot went,” said Takahashi. “The numbers showed great results, and we were happy to have participated in the pilot for first-hand experience. It was a good exercise for the HVAC team to get involved with the energy team. It turned out to be a nice learning tool for everyone involved to see how the district’s equipment performed and how different approaches can impact natural gas consumption.”

Burnaby’s results were added to the results of the 19 other buildings that participated in the FortisBC: Innovation Demonstration Program study of the same non-ionic surfactant. Following the successful results of the pilot buildings, FortisBC launched a rebate category specifically for hydronic additives and made it available to all FortisBC commercial customers.